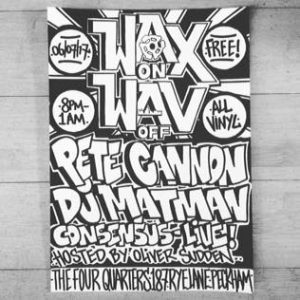 Back at it for July, summer is here and we’ll be getting down as ever at
The Four Quarters Peckham for the eleventh WAX ON WAV OFF event.
Live on the First Thursday every month we bring you the UK’s finest Record Collectors, Selectors, Turntablists all in an intimate basement in the heart of South London.

PETE CANNON
UK super producer, crate digger and party rocker joins us with a selection of rare samples, breaks and some hard Jungle Flavas for the late night squad.

DJ MATMAN
Multi award winning DJ known to kill every dance he enters, bringing an exclusive set of 45s. Hip Hop, Breaks and rare treats thrown in. A must see

OLIVER SUDDEN
Hosting the jam and dropping some twisted beats early on. Only the Early birds get to hear these oddities!

Live PA – CONSENSUS
The London Veteran MC will be in the building performing tracks from
His latest highly acclaimed project „ConCERNed“
Check it out at the link below..

Get down early to witness the whole show, spread the word
Hope to see you all there
Peace